The same methodology was applied to three additional visualization targets to examine the effect of target geometry on observed boiling phenomena.  All three targets featured a wider chamber to allow for higher beam transmission and an increased chamber height, consistent with current trends in high power targets.  One target featured a reduced chamber depth, and another had a ramp in the back of the chamber to reduce fill volume.  Target pressure was limited to a maximum of 14 bar (200 psi) due to the larger diameter beam window.

The three targets were each tested at 7 bar (100 psi) and 14 bar (200 psi) for several fill volumes.  For each experimental condition, the beam current was slowly increased to determine the values corresponding to the onset of boiling and to the onset of beam penetration.  Each target was tested at a fill volume of roughly 1 mm above the top of the beam strike area.  If beam penetration ultimately occurred due to beam passing through the overpressure bubble, the target was tested again at a slightly higher fill volume. 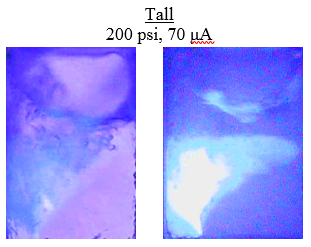 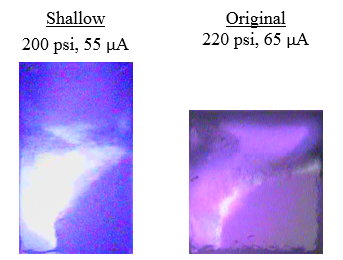 For all of the visualization targets, a stable natural convection current was visible at all power levels, even before the onset of boiling. For higher beam currents, bubbles form in the Bragg peak region and near the surface of the beam window. Bubbles formed in these regions rapidly travel upwards due to buoyancy forces.  As a result, average void fraction in the target increases with height. The increase in void fraction leads to a reduction in density and a corresponding increase in the proton range, which is exaggerated at higher beam currents.  Unlike the original visualization target, disruption of the helium bubble was not observed for the new targets, most likely due to the increased chamber height. 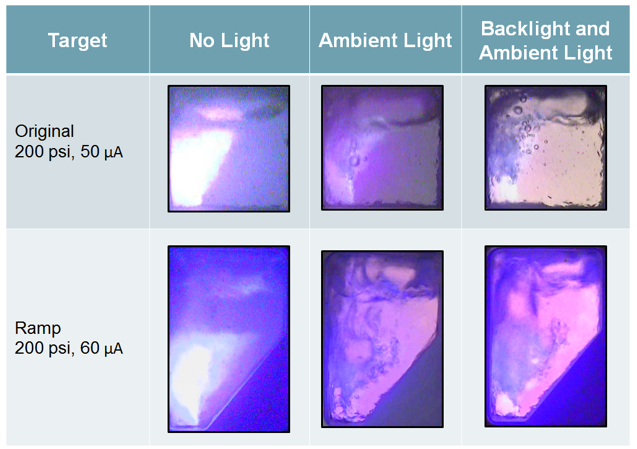 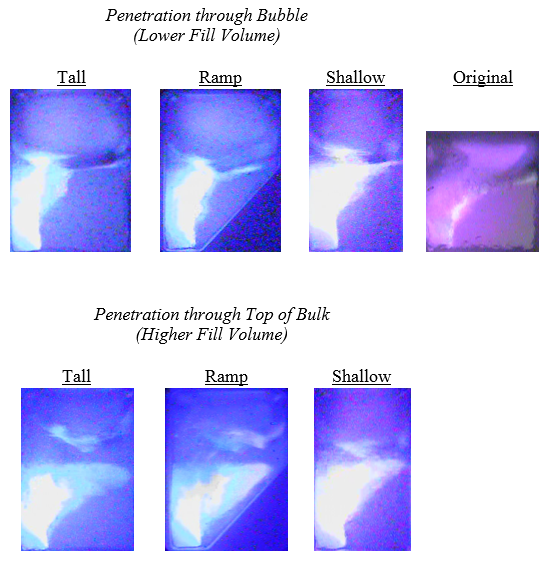 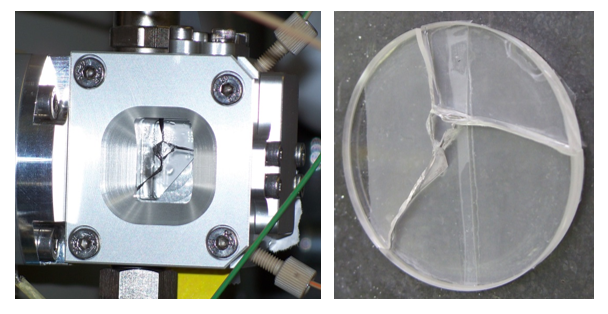 The cause of the break is unknown, but possible explanations include accumulated radiation damage and thermal stress.  There is some evidence that the beam shifted off-center, in the direction of the broken viewing window, during operation of the ramp target.  This statement is supported by asymmetric discoloration on the integral beam window and asymmetric burn marks on the back wall of the target, where beam struck the wall during the loss of inventory event.  Thermal stress could be caused by the large temperature gradient on the window between the region in contact with the cool aluminum flange, at roughly 16°C (60°F), and the region in contact with the boiling water, at saturation temperature of roughly 195°C (383°F).